Chitradurga: To encourage millet farmers from next monsoon, farmers growing foxtail millets, little millets and pearl millets will get Rs. 5000 per acre as an incentive for cultivating millets. He was speaking at the inaugural function organized by agriculture and associated department at APMC enclave in Chitradurga.

Exhibitions and melas would be conducted in different parts of the cities by the government, organic farming department.

Citizens will be made aware by such melas about the sicknesses like diabetes, blood pressure which can be controlled by consuming Finger millet (ragi), Foxtail millet (navane), Little millet (same), Pearl millet (sajje) and pulses like udali which have great medicinal properties.

Foxtail millet (navane), Little millet (same) and Pearl millet (sajje) are grown in large quantities in Hosadurga, Hiriyur which is also famous as the Millet growing region. Procuring and processing of these millets needs to be properly done and for this reason special unit will be set up at Hriyur. Already 4 companies have shown their interest in this project. 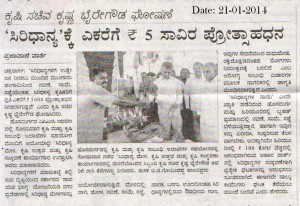